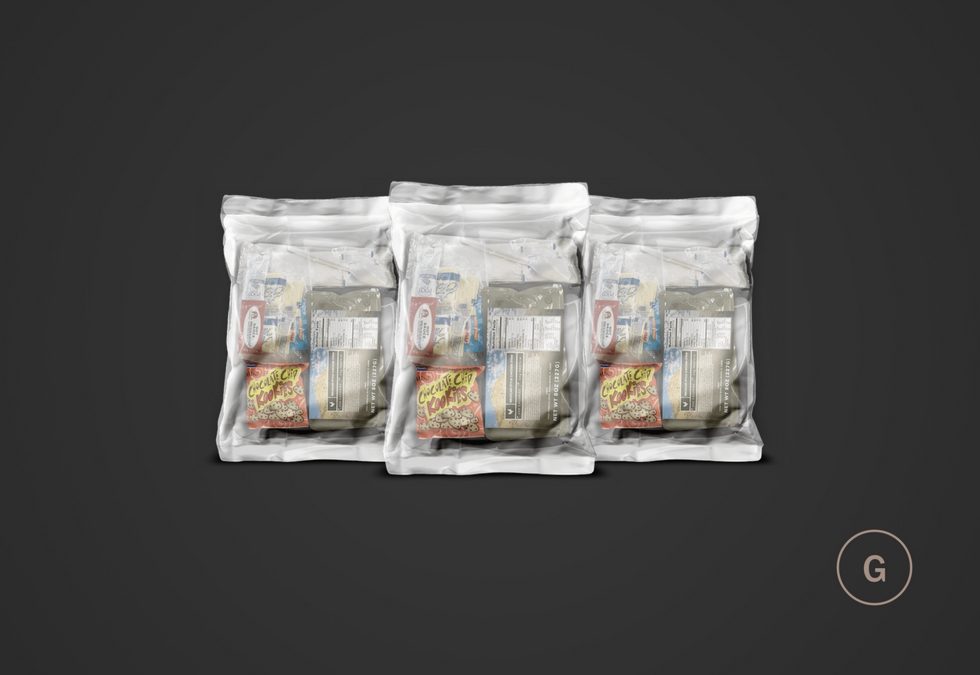 MRE Meals And What They Are Made Of

Ever wondered why the military personnel carries the MRE meals to combat? The simple answer is that, it is relatively more comfortable to move, and this is possible based on the lightweight packaging to it. They are mainly carried during combat for the simple reason of unavailability of organized food facilities. MREs, which are also known as Meal, Ready-to-Eat are often kept cool, this is because they don’t particularly need to be refrigerated. This then begs the question of what the meals are made of.

Starting with the primary requirements of each MRE meal, we see that each meal ought to have the capability of providing about 1200 calories. The maximum amount of time the MRE meals can go, is approximately 21 days, with an assumption in play being that the available logistics units can avail fresh food rations by then. The meal stands at a minimum shelf life of about three to five years, and this mainly depends on the storage conditions.

The packaging requirements for the MRE meals are stringent, and the meals have to ensure they withstand both the parachute and non-parachute drops. The packaging should hold the minimum shelf life of three and a half years, and this should be at 27 degrees Celsius, nine months should be wholly at 38 degrees, with the shorter period holding from around -51 degrees to 49 degrees, there should be an assured state that this is sustainable.

Other new forms of packaging might also be put into considerations for the primary purposes of the meal. The MRE is a complete set of self-contained meals, and this is why the packaging is made in such a way that it can be able to withstand rough conditions and also the exposure to individual elements. The MRE bag primarily contains the entrée accompanied with different varieties of both food and drink items.

The MRE bags come fully packaged in cases that each contain 12 meals. Available in about 24 menus which are of a variety of meals. The lists that hold the numbers 1-12 are packaged in a designated case A, with the menus 12-24 being wrapped in the next case B. The components of each meal is found in the MRE listings of their different lists.

However, these menus are changed by the military on a yearly basis, so the chances of getting to experience the same cuisine in the next year are often rare. The general MRE meal contains the following:

Accessories such as the spoons, sugar, creamer, toilet paper, matches and salt

Each MRE meal can provide to over an average of 1250 calories, which when broken down consists of 13% calories, 51% carbohydrates and 36% fat, included is the 1/3 of the recommended daily allowance of the provided vitamins.

The MRE meals as predicted are ready to eat meals, what this means is that every food can be consumed without heating or cooking it, the beverages are however much better with water added to them. The entrees and the side dishes can be eaten cold, although the fact that they taste better when they are heated up.

The MRE meals weigh about 510-740g, and this mainly depends on the menu. The MRE contain water, and because of this factor, they weigh more than the freeze-dried meals which include the same amounts of calories.

Despite the meals being used mostly in the military, it is also made up of a wrong side, which interferes with the lifespan of the food. This is mainly seen with the hotter it gets, the faster the subsequent shelf life of the MRE meal deteriorates, what this does, is that it makes the meal an inferior choice for the vehicular storage. This is where the temperature extremes are a provided fact of life.

High temperature plays havoc to the structure and makeup of the meals, and this makes the MRE meals not entirely suitable for the issue of vehicle emergency kits, this being one of the main reasons people get to purchase the MRE meals. The freezing process can also damage the makeup of the MRE meal. However, this is not particularly true for the freeze dried food, where cold is no issue. Freezing can make the packaging of the MRE meal to delaminate, and what this does is wholly affecting the edibility of the foods contained in the meal packages.